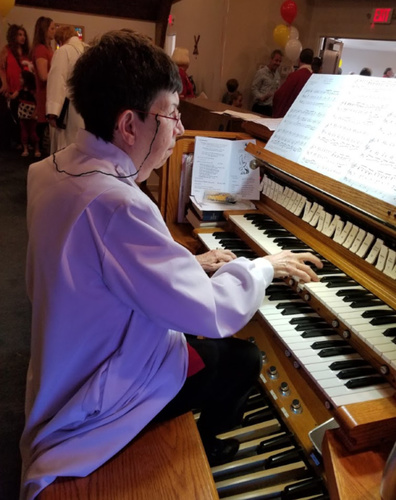 Annette showed up at St Theodore's over ten years ago, found some music on the organ rack and has been playing here ever since.

In addition to having a great sense of humor, Annette was raised here in Arkansas and attended the College of the Ozarks before graduating from the University of Oklahoma in vocal performance. She has attended multiple graduate classes and workshops in vocal pedagogy and research, church music, and choral music.

Annette spent several years in New York where she taught classroom music and private voice in the Adirondacks, and also served as a vocal adjudicator at state music contests. She worked her way through college as a staff accompanist, but didn't study organ until she was in her late 30's. “I immediately loved the organ because of the variety of beautiful sounds available.”

Annette’s role at St. Theodore’s is her first combined organist/choirmaster position. She has been a church organist for over twenty-five years. In her spare time she loves to read, cook, knit, eat, garden, travel, and waste time.